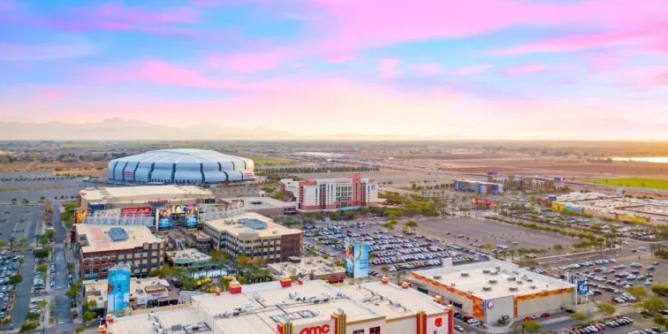 Yesterday, at approximately 7:25pm, the power in our apartment complex near Westgate went out. I went out onto my back patio, to see if anyone else was experiencing the same issue- and sure enough there were several neighbors also on their patios looking around.

At that moment, there were shots that rang out over at Westgate Entertainment District, not more than a 5 minute walk from us. I didn’t think too much of it, and went to take out the trash while going to talk with some of my neighbors about what could be going on with the power. We had gotten an email from SRP, they were aware and looking into it.

All of a sudden, there were police sirens and a police helicopter appeared overhead. One of the neighbors had overheard there was a shooting at Westgate by Johnny Rockets over the police scanner.

I headed back to my place, and within minutes, there were dozens of police and first responders descending on the Westgate area, surrounding and securing it, including our complex and streets in and out of Westgate.

We weren’t real sure what was happening, but had heard a few people were shot and the shooter was apprehended. They were unsure if there was a second shooter involved, so everyone leaving the area had their vehicles stopped. Everyone was asked if they had seen anything and officers let them know they may not be able to get back in for a while if they lived there because of the situation.

I watched from my balcony (power still out inside) as the police and first responders set up road blocks and organized a media center. Glendale PD social media alerted people to avoid the area and gave updates as they were able. My phone was at low-battery life, so I was out of the loop besides what I could hear the officer saying to people at the corner and neighbors who ventured out to see what was going on.

Despite the craziness of the situation- our power out and the area being locked down for a shooting- there was a feeling of safety. Help was there. They turned on the parking lot lights at the stadium as well, which added to a feeling of people being proactive about the situation and make sure everything was being done to protect us and minimize any potential further threats.

This morning, the dust has settled and the facts are more clear. Our hearts go out to the victims and their families. But also to the Westgate restaurant and shop owners, the workers and customers.

All we want is the freedom to live again and be able to provide for our families and enjoy the things we love, as safely as possible. Its a powder keg right now, with people’s fear of either sickness or joblessness boiling at the surface.

It could happen anywhere, so everyone should be alert. However, I do believe that the Westgate area is as safe as can be with active security, it is well-lit and the police and first responders who are well-trained and quick to be there when needed.

“As we being to emerge from our homes into our public spaces again, evil acts like this have a very fearful and paralyzing effect – that is, if we let them,” Mayor Jerry Weiers said late this Thursday morning. “I am asking all of you please don’t give into fear. Don’t allow senseless acts like this to change your habits.” He described the Westgate shooting as ‘a very isolated incident’, offering his assurance that both the city and the Westgate community are safe.

Glendale Police have asked if anyone has first-hand video or are additional witness to upload / reach out via this portal they have provided:
Westgate Active Shooter Incident