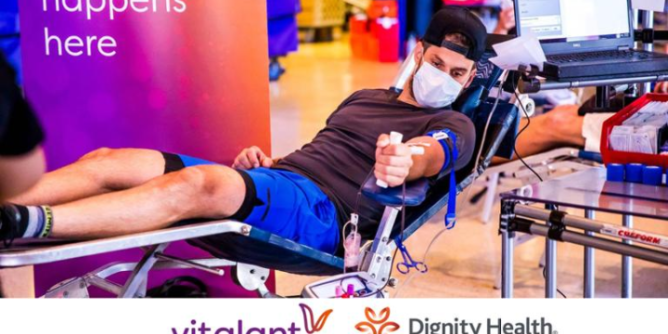 GLENDALE, ARIZONA — The Arizona Coyotes, Gila River Arena and Dignity Health announced today that the team has partnered with Vitalant and Streets of New York to host a community blood and convalescent plasma drive on August 3 and 4 from 8 a.m. – 5 p.m. to fill the gap of thousands of blood donations lost due to the pandemic.

Coyotes President & CEO Xavier Gutierrez will kick off the blood drive with a donation at 8:00 am on Monday, August 3.

from the Arizona Coyotes Press Release

PHOENIX — Gila River Arena announced it will host a blood and convalescent plasma drive to address the decline in donations made during the coronavirus pandemic.

The drive will be held Monday and Tuesday from 8 a.m. until 5 p.m. in partnership with the Arizona Coyotes, Dignity Health, Vitalant and Streets of New York, according to a press release.

“Due to safety measures implemented because of the coronavirus pandemic, hundreds of blood drives and more than 17,000 blood donations had to be cancelled across Arizona over the over the past five months,” Sid Lewis, Sr, Director of Donor Recruitment for Vitalant’s Southwest Division, said in the release.