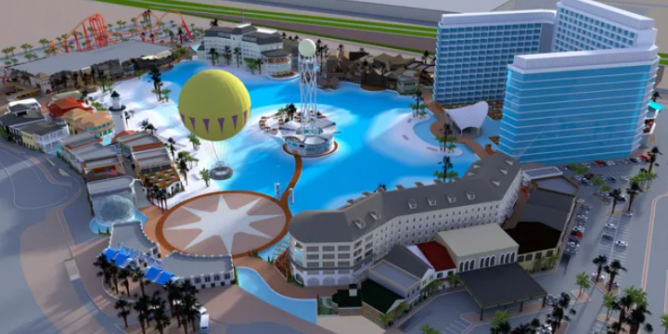 Glendale could see a new resort-style development, anchored by an 11-acre water park and a massive hotel, near its Westgate Entertainment District by the time the city plays host to the 2023 Super Bowl.

The Glendale City Council on Tuesday voted unanimously to approve the project — dubbed Crystal Lagoons, Island Resort — that will let visitors swim and use nonmotorized devices like paddleboards, boogie boards and scuba diving gear. It potentially could let visitors use water jetpacks.

Besides the water park, plans also call for:

It’s scheduled to break ground in the fourth quarter of this year and to open by October 2022.

The Crystal Lagoons project is planned between Loop 101 and 95th Avenue just south of Cardinals Way.

The Crystal Lagoons project will add to the increased development around Westgate.

The City Council in May voted to approve two new projects that will bring more housing, retail and dining to the area. One project will bring nearly 200 bungalow-style rentals to the southeast corner of 91st and Orangewood avenues. The other will bring dining and retail, including Starbucks, Raising Cane’s and Honey Go Nails, to the northwest corner of 91st and Glendale avenues.

Check out AZ Super Bowl Blog for the latest local information as we prepare for hosting the Super Bowl here at State Farm Stadium in Glendale, Arizona in 2023!