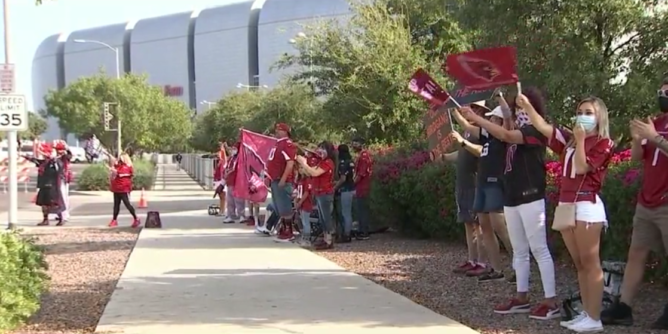 No Tailgating, No Problem
No tailgating was allowed in the parking lots around State Farm Stadium for the home opener Sunday, Sept. 20 vs the Washington team (and no fans in the stands). However, some members of the Bird Gang still found a way to get out to the stadium sidewalks and show their support for the Arizona Cardinals on their way in to the game!

You may have seen them on the news (like I did) or read about them (here: Rise Up, Red Sea: Fans cheer for AZ Cardinals, from a distance and here: COVID-19 keeps fans out of State Farm Stadium).

This next week, they’d like to see even more Arizona Cardinals fans out at State Farm Stadium “sidewalk-gating” to support the team and coaches as they head into the home game vs. the Detroit Lions (Sunday, Sept. 27).

We caught up with Eric, who heads up the Bird Gang Travel Club (catch my interview with him on Fan Zone Friday!) and here is the information:

We learned week 1 players and staff begin driving in about 9:30 am (game vs. Lions start time is 1:25 pm), so as long as you’re out there before that time, you won’t miss anything other then the guys setting up the cones, blocking off the street and mostly media rolling in.

The other fun part is the visiting team buses roll in right past us, so its great to greet them with a chorus of boos as they drive by.

So options on parking (because all of the stadium lots are closed off) is going be either (north) by Carl’s Jr. / (Tanger) outlet mall area, and walk south down 95th Ave. past Gates 2 and 1 until you get to back of stadium (south – its closer to Bethany Home Road/Cardinals Way) or park over by American Furniture Warehouse and walk east up Bethany/Cardinals Way until you hit 95th Ave.

As far as what to bring: water for one- it is still warm out, a folding chair if you feel like carrying it, flags, banners, or get creative and make a sign! Show your support for the team since they don’t have us cheering inside.

You can connect with Eric and the Bird Gang Travel Club along with other Arizona Cardinal fans on social media:

Hopefully we’ll be back tailgating soon, but for now, the next best thing is to come on out! (Red Sea Rise Up!)

**Update! Here is a news segment about Arizona fans cheering from the sidewalk before the Card vs Lions game!